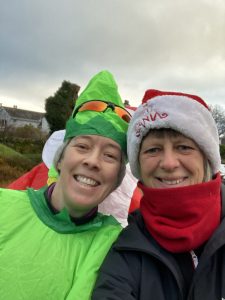 It was just a bit too dreich and blustery to entertain the thought of 18 long holes. Especially with the forecast so poor. So all six intrepid golfers headed out instead of a quick social sweep over 9 holes.   It was windy and rainy all the way round. Fortunately, we’re all nails so there […]

After storms Ciara and Dennis put the kibosh on the last two weeks’ play, we were all suffering rather badly from cabin fever. Luckily Storm Jorge was considerate enough to delay his arrival long enough to let us set out for some fresh air. Full disclosure: I wasn’t keen having walked up and aquaplaned […]

The weather had improved markedly since last week, despite the horrific forecast. We had 7 golfers line up for the February Medal.   Marena & I set off as the second pair behind Erica & Elena. Janette, Linda & Anne brought up the rear (not a euphemism).   We both managed to stonk our drives […]

Ladies Winter League – And then there were five

A balmy 19 degrees in New Galloway today…delicious for golf… ………aye, right! 19 degrees fahrenheit maybe…aka 7 degrees celsius. Not warm. Nor very dry either, as you can see from my gloves after a 9 hole round… And a touch breezy…the fourth green isn’t usually the windiest place on the course. So five of us […]

Let me assure you that the late arrival of the blog is in no way a reflection of the magnificence of the golf played this week! Week 12 of the Winter League turned out to be a hotly contested affair. We had our closest result in a month. Six intrepid golfers headed up into the […]

A terrific turn out for today’s golf  – there were ten players champing at the bit to get a round in.   And there was an even better turnout for Not-the-Xmas-lunch as a couple of currently non-playing members joined us for the feast.   It was great to see a few regulars who were able […]

Golf – A Haiku Gusty break of day A better, rainy golf swirls watching the mince pie (thanks to the Haiku generator – click here) Or in plain English? … The weather wasn’t great.  Not as bad as I’ve seen but not pleasant either: I was willing to go out. Mainly thanks to the lingering […]

Ladies Winter League kicks off in 2020!

Plenty of that liquid sunshine on the course today. And six golfers turned out for our first Winter League competition of the New Year.   We set off in the second group under some glorious skies…     The course proved a bit challenging this week. So there were no blob-free rounds. Though Erica got […]